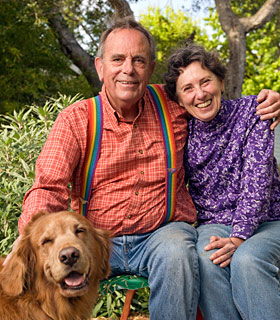 Less than an hour from the hustle of California's Silicon Valley is a huge, thick redwood forest rolling over the rugged Santa Cruz Mountains, a perch for viewing the sweeping Pacific Ocean nearby. Redwoods' tops reach out of sight. The ground is spongy with its carpet of rusty leaves. Sweet earth and bay laurel scent the cool air.

Save the Redwoods League and four other conservation groups launched the Living Landscape Initiative (LLI), to protect CEMEX Redwoods and others like it near Silicon Valley.

Motivated by the LLI's goals, Pam and Allen Rozelle, who live in the heart of LLI territory in Santa Cruz, gave a generous charitable gift annuity to each of the Initiative's five organizations (in addition to the League: Land Trust of Santa Cruz County, Peninsula Open Space Trust, Sempervirens Fund and The Nature Conservancy).

In addition to their sense of satisfaction from supporting the forest, she said, their gift provides them with reliable income and a tax deduction.

"We were impressed by the cooperative aspects of the project and galvanized by the $15 million commitment put forward by the Moore Foundation," Pam said. With some securities destined for charity in their wills, news of the Initiative moved them to re-examine their giving plans. "A charitable gift annuity actually offered a higher yield than our current investments, plus tax deductions," she said. "How could we say no to doing well by doing good?"